Here’s a back catalogue, of which I’m uncommonly fond. I realise now that they’re both about me rather more than I knew they were when I was writing them. But I don’t think that’s necessarily a bad thing for the reader – they’re not dispassionate books, but rather approach their very separate subject matters from my own direct experience, rather than from a cool objectivity. So, serious subjects, but a decent romp through them, I trust. They’re still in print, too.

A novel. The Rev’d Natalie Cross tells her tale – and disturbing it is too.

One of my fave reviews on Amazon, from “Joey”:

“Truth is I was engrossed, shocked, discomforted and had a total girl crush on the heroine priest at the heart of it all, Natalie Cross.”

The Death of Spin 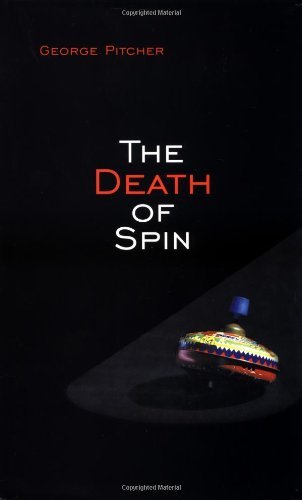 “Revealing and highly entertaining. Mr Pitcher writes like a dream. This book needs no further spin” – William Keegan, The Observer

I didn’t recognise it at the time, but this book was born of my growing disenchantment with the communications industry in which I found myself at the time and in which I’d made a decent fist of building a consultancy during the boom years for spin doctors. In the Nineties, it had been a cool trade to be in, but then around the dawn of the millennium our social reputations fell off a cliff, thanks to the tawdry machinations of New Labour and the phoney values (in every sense) of the City’s approach to the economy. So this was a prescient book, though I say it myself, about the dangers in politics and business of prizing style over substance, image over belief. It was published ahead of the Iraq war in 2003 and the banking crisis of 2008 (and about two years before I quit the industry), but it’s all the better, I think, for not being a told-you-so book – and its warnings and indictments are as relevant a decade on as when I wrote them. By the way, people who haven’t read it invariably look at the title and go “whoa, you called that wrong.” No, dunderheads, if I thought spin had died I’d have called it Spin Is Dead, see? The Death of Spin is about how we need to put to death practices we have learned in the post-modern era in favour of forms of communication that are authentic, honest and ethical. Reckon that’s as sound a call to arms now as it was in 2003.

A Time To Live: The Case Against Euthanasia and Assisted Suicide

The title of this one says it all really. I’d been a vigorous opponent in my columns in the Daily Telegraph of those who are campaigning to change the law to allow assisted suicide in the UK and was asked to put my case in this slim book (160 pages, since you ask). I was anxious not to write a religious” book – it suits euthanasia enthusiasts to suggest that their opponents are all swivel-eyed god-botherers. In fact, opposition to this grotesque practice is embedded in the context of the civilisation in which we live, one which holds that all human lives are of equal and infinite worth, that our medical profession would be fatally compromised if it prescribed death as a clinical treatment and that our noble efforts and all our resources are rightly focussed on making palliative care the priority in end-of-life care. The book looks at case histories and analyses the legal, medical, social and, yes, religious cases for euthanasia and finds them all wanting. It was published ahead of Lord Falconer’s entirely spurious exercise in propaganda with his “Commission for Assisted Dying”, which only makes the issues raised in the book more urgent and trenchant. As Dr Rowan Williams said, it “is probably the sharpest moral and legal question of our time”.

The Public Faced: Your Message and the Media

And – wondrously, hilariously, post-prandially – I see that this is still available from some good booksellers and purveyors of fine archeological artefacts. It remains still, IMHO, the best guide to managing the print and broadcast media, carved in stone as it was in 1989, before the internet was brought down from Mount Sinai and the 10 commandments were tweeted. Also illustrated with the famous Alex cartoon-strip character, before he became famous. A real collectors’ item. For people who collect items.

“Don’t get caught”: The 11th Commandment

The drama of journalism Lock-down: Alone in church with a blackbird